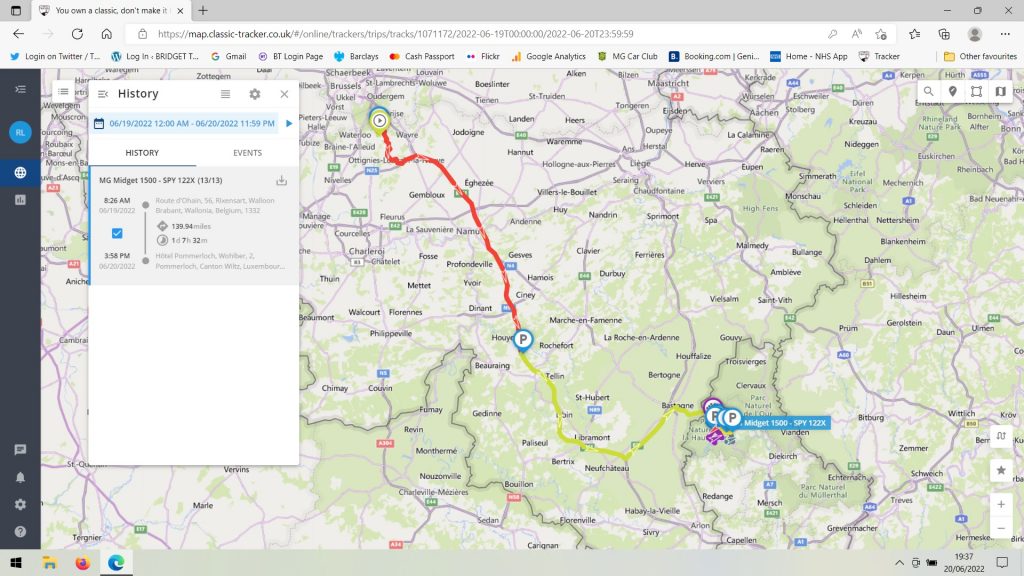 When I left you last I was looking forward to a day watching a re-enactment of the Battle of Waterloo, on it’s 207th anniversary and what’s more on the original battleground. I passed a couple of pleasent days leading up to this momentous occasion watching some golf at the Royal Waterloo Golf Club, and wishing I had loaded my clubs in the car before I left, and taking in some of the local scenery and community activities.

Anyway, Saturday morning arrived and I set-off to the location, stopping at a local supermarket to load-up with some refreshment. The sky was cloudless and the heat by mid-day was too much for some of the tourists. I started off by making my way to one of two bivouac areas which was far larger that I had expected and extremely busily habitated. There was row-upon-row of tents grouped into different companies, battalions and regiments. I found one platoon of Scots Guards consisting of three Scotsmen, one man from Kent or Kentish man (never know the difference I’m afraid) and a Frenchman!

Pretty much every group had excellent displays of military equipment and armaments, as well as an interesting collection of utensils, and every day items of life from that period. There were also artillery regiments complete with canon of varing authenticity, and a good representation from the calvary regiments, mainly British, French and Prussian.

There were also a good representaion of military bands, unsurprisingly including at least one pipe band, and a small number of medical staff. Unfortunately, in the battles of the era, there was a dreadful shortage of trained medics. I seem to remember seeing a statistic of one doctor per battalion with a small number of trained nurses and a mixed array of untrained volunteers to tend the seriously wounded and act as stretcher bearers. The recorded death toll of the battle was in the region of 10,000 soldiers and some 30,000 horses. Evidently there is no clear record of how many wounded succumbed to their injuries after the battle, but it would probably have doubled the number of fatalities.

The re-enactment itself was held in the evening and stretched to around something over two hours. As I had gathered when looking around the museum earlier, there is a very real bias in favour of Napolean. All the main seating was beside or behind the French army, with the “others” spread across the battleground furthest away from the ‘witnesses’. The British were formed in their defensive squares that caused the French calvary so much trouble, and the Prussians were on the left flank. Then rank after rank of French infantry appeared from several different directions, sweeling the French ranks considerably. It was easy to see now however, how the re-enactment invovlves 1,500 participants, all enthusiasts, volunteers and family. There was a surprising number of ladies and children, representing the families, and some of the women dress aas soldiers and join the ranks.

Fortunately, the Belguims did not allow their bias to change the outcome and so the cream floated to the top. Wellington was victorious and all the particpants agreed, same time, same place, next year.

The next morning, I gave Bridget a quick check over before starting off for Luxembourg. During the past couple of days I have noticed a slight knocking when coasting, but nothing I could identify. The minor roads arounf the Waterloo district are often cobbled and everything shakes like mad. The noise appeared to stop as we gathered speed and once we were on a smooth surface.

I have made a last minute decision where to stop for the night and actually booked a hotel. This is not something I often do for two reasons, firstly it is easier to arrive in a new location and find a hotel than to arrive and have to find a specific hotel. Secondly, those occasions that I have booked ahead always appear to precede a problem. That may not be factual, more a mindset, but there it is.

Anyway the drive proved to be smooth, peaceful and scenic, or it was until shortly after filling up with fuel at a station near Wiltz when there was a rapid increasing volume of metal grinding on metal. I pulled Bridget into a parking lay-by and switched off the engine. Getting out as quickly as possible, it takes me around three minutes nowadays, I stared a quick inspection. Missing it on the first sweep my eye caught on a rear passenger-side wheel at a rather jaunty angle! It took only a moment to identify one wheel stud had sheared off, and the other three wheel nuts at various stages of loosness. Another two or three hundred metres and I would have had only three wheels on my wagon.

Having now had the time to consider the evidence I am reasonably sure that the wheel stud (a bolt for non mechanics) sheared whilst we were running over the cobbles of Waterloo and that the wheel worked increasingly loose as the drive went on. It was some 120 miles.

I jacked the car up re-fitted the wheel securing it only with the three remaining nuts and gently drove the fianl three miles to the hotel in Esch sur Sure, Luxembourg. Ignore the number of wheels for the moment, this is the 53rd country Bridget has driven through.

First thing this morning, I checked out of the hotel and drove 3 miles back up the road that we had arrived down yesterday and found a garage with a mechanic. I was certail that they would have a similar stud to the one that had sheared off, or if not we could modify another. This sadly was not the case. The stud bolt is quite a complex construction which I had frankly forgotten and you cannot just modify a standard bolt safely. And where wheels are concerned ‘safely’ is the operative word. So, having checked through all my spares in the boot of Bridget and found only spare wheel nuts, it was on to plan ‘B’. A phone call to the UK would have two studs (including a spare, in case another goes) on a courier and in our hands tomorrow. The garage owner said “You’ve forgotten Brexit”. Following a lengthy wait, with calls to six different courier services, it is indicated that it will be Friday before it arrives via French Customs.

So I am now booked into the hotel I originally stayed in at Esch sur Sure until Friday. I am afraid I am never at my best when suffering enforced stopovers, even when it is a nice location and it is very nice here. I shall do my best to get out and enjoy some of the surrounding countryside, on foot and dream of where I can drive on Saturday, all being well. One up-side is that the hotel I shall be in does not have WiFi and mobile coverage you have to go up to the roof to receive. In the reception there is sign saying, “We don’t have WiFi – talk to one another”